Brewers may work for breweries with large-scale national or international production through to small micro-breweries. However, all brewers are responsible for making beer either at specific stages of production (i.e. brewhouse, fermentation, cold room or packaging) or in its entirety from ingredients intake to final package. Whilst well established, the brewer occupation is a diverse role which may vary considerably across the sector.

As well as beer production, a brewer may be expected to understand and take responsibility for compliance with relevant regulatory requirements. The brewer may also have a role in design and development of new brands and will need to react to information related to the quality and consistency of beer at various stages of production and once in final package. The brewer may also have input to the selection, design and operation of equipment and technology implemented within the brewery and which is required for processing of ingredients as well as beer production. Finally, a brewer may be required to take part in public facing activities such as product launches or beer tasting sessions.

Dependent on the size of the brewery a brewer may work alone or as part of a team. In smaller breweries it is more likely that a brewer will be required to work with more autonomy across the entire production process. For larger producers it is more likely that a brewer will be responsible for specific parts of the production process, working alongside or even leading a small team of production operators. In larger organisations brewers are more likely to report to a senior brewer or director and may also be required to interact with other members of the business. For instance, to work with engineers or report on production metrics, help market existing brands or even to develop new ones.

The UK brewing and pub industries are a significant contributor to the National economy and breweries represent a diverse sector of UK food and drink manufacture. There are over 2000 breweries operating in the UK and which vary considerably in size and production capabilities with outputs that range from 300 hectolitres to over 5m hectolitres per year. The majority of beer produced for sale in the UK is sold as lager typically in kegs, bottles and cans. UK brewers are also famous throughout the world for production of cask conditioned beer, typically ale. Irrespective of ale and lager, UK brewers now produce over 140 different styles of beer. The number of breweries in the UK has grown in recent years, along with the variety of beers produced, making it an exciting time to work in the industry. 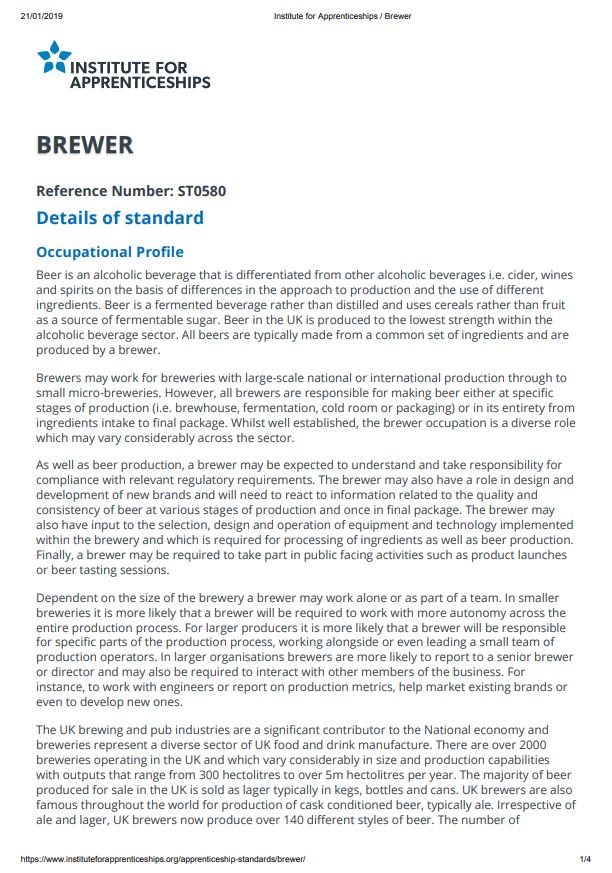